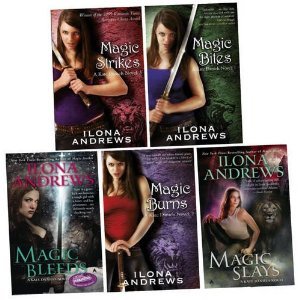 A while ago I read this anthology called Dark and Stormy Knights. In it was this short story featuring a mercenary named Kate Daniels. The story was called A Questionable Client and Kate was hired to protect a very wealthy person from some Russian magic users. I really enjoyed this story but I didn’t know if this was a one off short like a lot of what ends up in these urban fantasy anthologies or if it was part of a series.

It turns out that it was sort of a prequel short story for the Kate Daniels series by husband and wife writers Ilona Andrews. I’d never checked this series out before and I’m rather glad I did. Kate Daniels et al exist in a world where magic and technology exist in waves. When magic is up, no technology works. This means anything from an automatic gun (why, I don’t know) to electric lights and vehicles (phones occasionally work though no one knows why). When technology is up, nothing magic works (cars that run on magic, fey lanterns, wards, spells). Because of the unpredictability of these switch offs, things like planes and tall buildings are no-nos. Magic eats tall buildings apparently.

This is a sort of post-magical-apocalypse world where magic users, shifters and other magical creatures exist. In this world, vampires are blank puppets run by so called Masters of the Dead (which I take to mean necromancers).  There are more types of shifters than just werewolves. Take for example one of the main characters, the Beast Lord. He is a were-lion which is apparently quite rare. The Beast Lord (Curran) controls all the shifters in the Atlanta area (anywhere from 3-1200 at any given time) to keep them from going ‘loupe’ (feral) so that humans don’t kill them.

The main character of the series is, obviously, Kate Daniels, who starts out as a mercenary and ends up as a liaison between the Mercenary Guild and the Order of Merciful Aid (they’ll help anyone but they could end up killing the client if they deem him/her/it a danger to humanity). She was raised to be a killer and she’s good at it. She’s got a goal she’s working toward and she will do it eventually.

Kate is one of those bad ass chicks that stays bad ass the whole time, even when she eventually decides that yes she does have a thing for Beast Lord Curran. She doesn’t just roll over and play the damsel in distress, which I love. A lot of these so called strong female characters out there will be strong…until a man gets in the picture. Then all of a sudden she can’t figure out when end of the sword to use (hint: its the pointy end). To be fair, she does have to get rescued by Curran from time to time BUT more often than not its because she saved his bacon first and is so near death that she can’t save herself.

I really enjoyed this series and plan on doing a more in depth review of each book. There is action, there is snark and there is just enough romance to make things interesting without it being all about the sex (which doesn’t happen until book 3-4 by the way). I highly, highly recommend these books as I burned though all of them in about a week. I’m hoping I can pick up the other short stories without buying the anthologies that they’re a part of, but we’ll see. Rating: A+