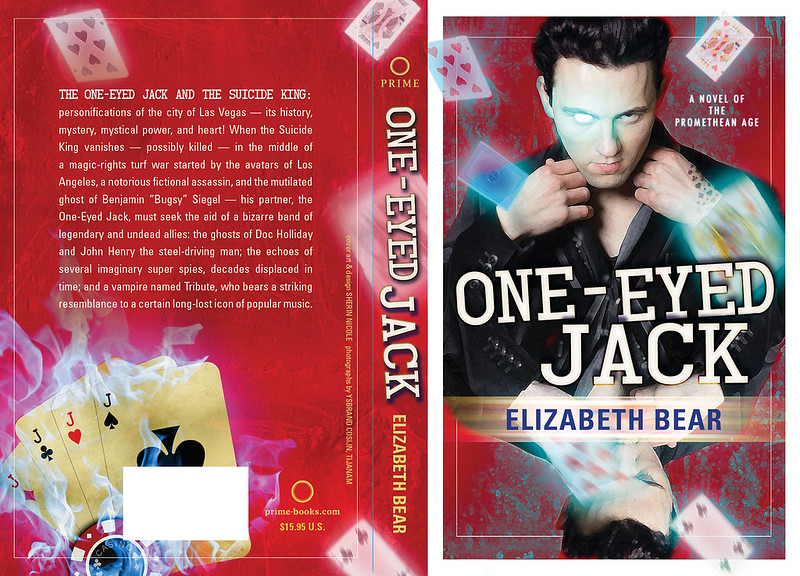 I love a good personification story. I find it interesting to see what an author can do with the idea that a city is literally alive, where there is one (or more) person who is the city. In the case of the world in One-Eyed Jack by Elizabeth Bear, most major cities have a genius (commonly referred to in fantasy novels as genius loci) that represent the idea of the city.

As you may have guessed from the title, One-Eyed Jack takes place in Las Vegas. Vegas has two geni, the One-Eyed Jack (Yes, his name is Jack-well, John Henry Kinkead-and yes, he has one eye) and the Suicide King (whose name is Stewart). They, like other geni, were once living humans who had a tie to the city they are bound to. That could mean anything from they were born there to dying there to being a significant part of the culture there (No, neither of Vegas’ loci are or were Elvis or Frank Sinatra).

I think that this book is part of a world but not necessarily part of a series. Its a little unclear because its called a novel of the “Promethean Age” but when I look up Elizabeth Bear’s other novels with that subtitle, their blurbs don’t mention Jack, Stewart or Vegas. In any case, some of the world building ideas seem to be already set in place, like mages being called Prometheans and having been wiped out (it sounds like mages are just bad news in this world. Again, don’t know why).

This book starts out with Jack and Stewart at the Hoover Dam. Something is up with the dam, it has some sort of hold on both Vegas and Los Angeles, beyond just the power of the Colorado River. Jack is convinced that this is a bad thing and tries to fix it. He uses Stewart, his partner in all senses of the word, the job of distracting the masses while he tries to put a date on a blank plaque of some sort on the dam.

Before he can do anything, Stewart “dies” from having thrown himself from the dam and missed actually killing himself (not that the Suicide King can kill himself because apparently that’s the only way he can’t die. Nice twist) and a genuis from Los Angeles interrupts Jack. Called Goddess, she is the personification of everyone who has tried and failed to make it in Hollywood.

Goddess and her sister genuis, Angel (the personification of the seedy underbelly of LA with a veneer of innocence), are up to something. Jack wants to know what but his curiosity gets him and Stewart in trouble. With the help of a couple ghosts (Doc Holliday and John Henry of steel driving fame), some “media ghosts” (They never come out and say it but I think the media ghosts were the two guys from The Man from U.N.C.L.E. and John Steed and Emma Peel from the Avengers) and a vampire named Tribute (also referred to as King and connected with LA and Vegas. Take a wild guess…Yes, you’re correct), Jack has to figure out what they’re up to and stop it.

Now the ideas behind this story were interesting. The genius loci, Prometheans, media ghosts, all pretty cool stuff. The writing itself could use some work. I’ve seen the technique of doing each chapter from a different character’s point of view (All of the Cal Leandros novels for instance) but this one was confusing because several of the main characters in the book didn’t have names. They were called the American, the Russian, the Widow, the Englishman and the Assassin. And there might have even been two Englishmen being referred to. It all got very confusing at times.

So if the writing got polished a little more and the novels continue with these characters, it could be pretty darn awesome. As it is, I just finished the book because I’d started it. I wasn’t really all that interested in the ending because I figured it pretty quickly. That’s not a knock to the writer. I just tend to figure out these things quickly. It took me less than half the movie to figure out that Bruce Willis was a ghost in The Sixth Sense (spoilers? Really, if you haven’t heard about that “twist” ending by now, it’s not my fault). Good ideas, like the fact that the main characters are a gay couple, love the media ghosts but overall…nothing to write home about and I’m glad I got it for all of three bucks (yay Kindle!). Rating: C-/C. Could be your cup of tea but it wasn’t really mine.