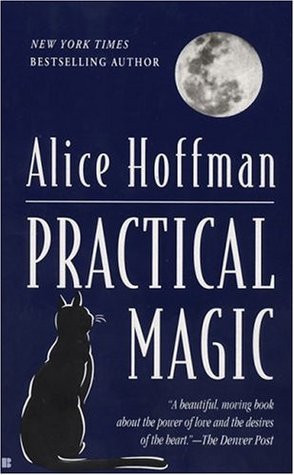 I got this book because I really liked the movie and I’ve thought for years now Man, I should really try that out. I kinda wished I hadn’t bothered. Alice Hoffman wrote Practical Magic and I have to wonder if this is her first book. If it is, I might give her a little leeway. If it isn’t…well, then she’s not a good writer. I really felt that I was reading the equivalent of a little kid going And then, And then, And then the whole book. There was a lot of exposition and not really a lot of pay off.

If you’ve seen the movie, then you know Practical Magic is the story of two sisters, Sally and Gillian Owens, who’s family is comprised of witches all the way back to progenitor Maria. Sally and Gillian are raised by their aunts, Frances and Jet, whose names we don’t actually get until the very end of the book. Otherwise, they’re just referred to as the aunts.

There’s no mention of a family curse against men Owens women marry, which is a key factor in the movie. And you have to admit, a pretty good plot point. The book is just sort of a slice of life look at the Owens women with a little bit of ‘magic’ sprinkled in here and there. Gillian does run away and Sally does marry and get widowed.

However, in the book, Sally also leaves the nameless little Massachusetts town after losing her husband, moving to Long Island where she leads a normal, boring life and raises two kids, one of whom is an extreme bitch and the other of whom has been beaten down to a mousy pulp by her elder, bitchy sister. The younger child is semi-likeable. The elder is not, even taking into account that they’re both teenagers. I found it too hard to care about either of them.

I actually found it hard to care about either Sally or Gillian too, sad to say. Gillian’s life is a mess and she blames everyone but herself, something I’m far too familiar with in real life and don’t want to deal with in a book. Sally is just…uptight. And a little sanctimonious.

I was really disappointed that there didn’t seem to be much magic in the book, just sort of hints to it. And Gary Hallet, who plays a pretty large and central role to the movie, is barely there at all. There’s not much in the way of character development for him either. Nor is there for Ben Frye, who ends up winning Gillian’s heart.

I wish I’d spent my money buying the movie rather than the book. On that note, why in the world is the electronic version more expensive than the paperback version?! That makes no sense whatsoever. Unfortunately, this book was a strikeout for me and there doesn’t seem to be much new on the horizon. Hopefully Peace Talks or the latest Simon R. Green will be out soon. Until then, I’ll be rereading some of my good stuff. Rating: D-. Wish I could return it and it didn’t add anything to the movie.