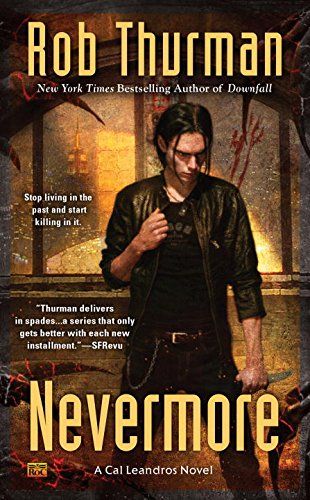 So my break was a bit longer than I had intended. That’s alright though, I most definitely needed it. So we’re going to start back with one of my current favorite authors, Rob Thurman. I love her (yes, her) Cal Leandros series. And her Trickster series. I hope there are more of those.

At any rate, her latest Cal Leandros is Nevermore(book 10 of the series). We start out with Cal apparently coming back in time (whoa, where did that come from?!) and more than a little crazy. I mean, Cal’s not exactly stable on the best of days, but right now he’s extremely unstable.

You see, Cal came back in time 8 years in order to prevent a secret human government organization decided that he was too dangerous, having gated in full view of humans in the light of day. At night, it could be passed off as a trick of the light or some such thing, but in daylight…not so much.

They figured the best way to do that would be to bomb Cal’s usual haunt, Ishaiah’s bar, when all of Cal’s friends were there. It might have worked, too, if Cal hadn’t forgotten to get the pizza and gone back out again. As it was, he merely had a front row seat for the two (yes, two) bombs took out his entirely family, his world.

With the thanks of some pre-planning by Robin Goodfellow (who died in the blast…supposedly. Not sure what, exactly, could kill a Puck who is easily 1 million + years old), Cal gets shoved back in time to try and beat the organization’s back up plan.

Known only as Lazarus, this person was sent back in time 8 years to kill Cal before he became too Cal-like. Sometimes I hate time travel stories. It’s so hard to keep things straight. Cal doesn’t know what Lazarus is, he just knows he has to keep himself together long enough to save himself and his brother.

To do this, he reveals himself to early Cal and Niko, who don’t really believe him but he knows enough about them that they at least marginally trust him. Unfortunately, Robin sticks his nose in, coming into early Cal and Niko’s world a full year earlier than he should have. So already, the time travel is having consequences.

This book is one of the best Cal Leandros novels yet…and it ended on a cliffhanger. Noooooooooooooo! It’s at least a two parter, could be even more. I really can’t want to see what happens. Argh! Cliffhangers are the worst and the best because you know there’s at least one more novel in a beloved series…but you won’t get that book for another year (usually).

Well, you can pass the time reading this book. It’s good and gritty and dark. Very pulp urban fantasy. Rating: A+